ShotSpotter’s Director Community Engagement Dr. Gerard Tate was joined by Reverend Damita Davis-Howard from Ceasefire Oakland, John Bush from the City of Savannah’s Office of Neighborhood Safety and Engagement (ONSE), and Wayne Rawlins, President of Ummah Futures International. During the ninety-minute conversation, they discussed the importance of data-driven, community interventions for reducing and preventing gun violence and building safer communities. Here are some key themes and insights that emerged from their conversation together. 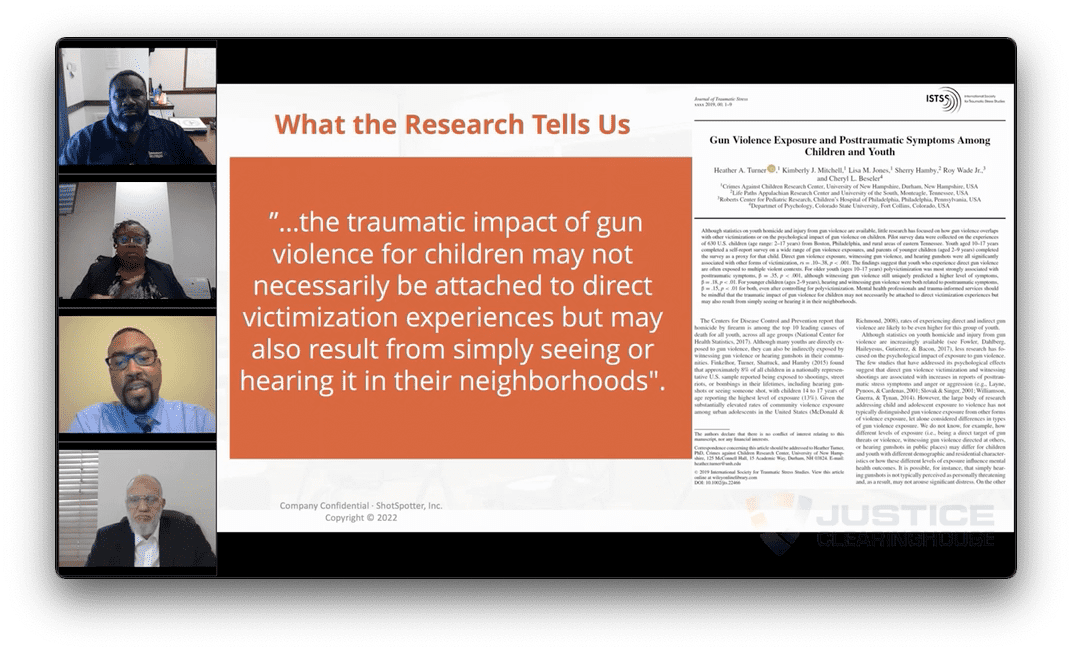 “The traumatic impact of gun violence specifically for children may not be necessarily attached to direct victimization experiences, but may also result from simply seeing or hearing it in their neighborhoods. Those children are consistently exposed to multiple forms of violence, including gun violence, and the next day they’re going to school [and they’re] facing a higher likelihood of negative behavioral and academic outcomes. Some of those outcomes could lead them to having negative encounters with law enforcement or put them at higher risk for becoming victims of gun violence or perpetrators.”

“My whole career has been in law enforcement and working with police, so I know how critical it is to know where gun violence is happening and where individuals are most exposed to gunfire. The problem is that in most cities, you’re probably only getting about 20 or 30% of your actual gunfire. But when you work with ShotSpotter, we’re able to track that additional 70%-80% of gunfire.

ShotSpotter’s Data for Good initiative helps cities share that data with community partners to drive non-law enforcement, particularly public health and educational resources, to build safer communities. I’ll give you an example. I speak on panels and mayors and city managers and other directors will tell me about their summer jobs program. And my question to them almost immediately is: ‘Did you use your gun violence data about where children have been most exposed to gun violence to ensure those children are signing up?’ It may take more time to enroll them, but removing them from an otherwise dangerous situation can make the environment better and safer for all children.”

“Another thing we work to do is build and maintain community support by staying engaged throughout the implementation of ShotSpotter and these programs. I’m a social worker by training. But I also come from the South Side of Chicago’s Englewood neighborhood and let me tell you, we didn’t have a lot of police or city engagement. And I lived in a very high-risk neighborhood and block.

With that experience in mind, my team and I go out to places where ShotSpotter is deployed to offer technical assistance and advise how law enforcement can effectively share their data. We also attend community events to hear from the community to learn what their needs are in order to maximize social and economic impact and build safer communities. Our ultimate goal is to help cities move from a place-based intervention and responding to where it’s happening, to a people-focused intervention that achieves violence prevention.”

“Ceasefire Oakland is a partnership-based, data-driven strategy for reducing gang and group-related shootings and homicides. And that’s based on data that we’ve done to determine what is driving the violence in our city. So we find that folks who actually belong to gangs are more likely to be shooters, not only in terms of group-on-group violence, but also in domestic violence robberies, and a host of other felonies. So if we focus on that population using a people-based strategy, we have a chance to reduce it. We also want to reduce recidivism. Locking folks up is not the answer. It has not been the answer for the last 30 years of the War on Drugs and it’s still not the answer. We want to use the data to try to modify folks’ behavior so that they have better outcomes in life.”

“You need the gunshot data in order to operate an intelligence-led strategy that reduces gun violence and homicides. We use this data to determine what’s driving our violence, specifically in the early stages to know who to talk to.

“I want to reiterate that it is a proven violence reduction strategy to use direct, respectful communication. That means talking to folks who might be drivers or victims or drawing violence in communities. We’re going to go talk to them first to try to stop the violence, whether they might be attracting the violence or actually being a perpetrator of violence. We call them impact players. They are also important because they can be influential inside groups or gangs and can deliver a message that they get from us during direct communication.

We are not accusing anyone of being involved in anything. What we are doing is outlining their risk. So even if you weren’t involved in, say, 25 rounds in your neighborhood last night, it is something that you need to pay attention to and make some adjustments in your behavior. And we offer them services if they want to make a slight change in their behavior, that will further change the trajectory of their life. It might include accepting services through our Department of Violence Prevention and engaging with a life coach. That is all part of the structure.”

Partnership to Address the Crisis of Gun Violence – John Bush

“I’m from the city of Savannah and serve as the Director for our Office of Neighborhood Safety and Engagement. Partnerships are essential, as is utilizing software to take those partnerships to make a melting pot out of the elements that we all bring to the table. You have your social services, you have your school system, you’ve got your government entities, you have the police departments, your court systems, the hospitals. We all have our role to play with the individuals that we’re dealing with.”

The Cycle of Violence and Providing an Off-Ramp – John Bush You’ll find me showing up in the middle of the night at the hospital with somebody shot, stabbed or assaulted. We’re letting them know that the system that they’re now part of – doctors, law enforcement, etc – we’re on their side. Nobody’s here to harm you. They don’t need to go back to shoot somebody else or get shot again. And within 24 to 48 hours, we need to be back in their faces, making sure we bring those extra support networks, case managers, counselors, therapists, and resources. We have partner agencies assisting with relocation, job placement, and education. It’s all about providing an off ramp so the individual doesn’t go back into their lifestyle.”

Importance of Visibility and Improving Perception of Safety – Wayne Rawlins

“Imagine this. It’s the morning right after a drive-by shooting has taken place in your neighborhood. And you have the mayor, you have the commissioners, you have the police, you have social services knocking on your door asking, ‘How can I help you?’

I’ll give you an anecdote. Outside a Super Bowl party in Miami-Dade, there was a drive-by shooting. We scheduled a Walking One Stop with police and knocked on a door with bullet holes. A woman answered the door. She looked to her left, she saw police. She looked to our right, she saw a community violence intervention specialist. Coming outside to the sidewalk, she confided that it was the first time since the shooting that she felt comfortable going outside. She was a prisoner in her home until Walking One Stop.”

“Back in 2008, we were in the midst of a housing bust and knew the county budget was not able to support the establishment of one-stop resource centers in all the areas of gun and gang violence. We also knew that if you direct your attention to just one area, you may quiet things there, but then there’s a displacement of crime that will move perhaps to another area. So we said, ‘Well, why don’t we bring that one-stop social and economic and health-related service center right to the doorstep of the residents in the areas that are the most challenging?’ And so it became an amazing ultra-community collaborative with the police and with other criminal justice agencies in order to begin to express healing in areas.

“The ShotSpotter data is amazing for community violence intervention. I know it’s been used for a law enforcement response, but it also directs our street outreach team. We can also direct our school-based interventions to the right place at the right time. We first determine where to go based on the ShotSpotter data, and then we set the date, organize, get the right players to the table, and meet at the local police department that serves as the jurisdiction for implementing the Walking One Stop.”

“We’ve had people at the doorstep. They came to the door with a small two-year-old child, and we said, ‘Do you need childcare?’ Yes. ‘Do you need a job?’ Yes. ‘If I can get childcare, I can get a job.’ So we provide them with free childcare because it’s available. They didn’t know how to access it. And now having employment, it can improve their quality of life and the quality of life in their neighborhood. Some of the most commonly requested services are employment, food, housing, childcare, rent, and utility bill assistance. And we have agencies that provide all of those services for free. So providing that access creates an opportunity for people to have an opportunity to have an improved, better quality of life.”

If you are running a violence prevention program and you don’t see social workers, school staff, community violence and intervention specialists, violence interrupters, and economic development specialists with you, your team is incomplete. Reducing and preventing violence is a team sport and requires a diverse array of community participation .

Jacqueline Berkman is a Senior Content Marketing Manager at ShotSpotter, where she focuses on storytelling and search engine optimization strategy to create memorable content that shares ShotSpotter's impact with the world. She has over ten years of experience working on content strategy in both the computer software industry and the publishing industry, and has a B.A. in English Literature with a focus in Creative Writing from the University of California, Berkeley. Show More

Learn More About Our Commitment to Reduce Gun Violence and Improve Police-Community Relations.